The Grayscaled Dragon is full of different shades of gray. The scales are shiny and mettalic-like. It is about 30 feet tall and 50 feet long as an adult and weighs 1 1/2 tons. It has a muscular build and can carry objects and monsters twice its size as it soars through the air. The scales are harder than steel, but when exposed, the skin is as soft as a baby's bottom. Because of this, dead Dragons make some of the best armor. The dragon's claws are able to slice through just about any material known to man. However, omly they casn scratch the surface of another Grayscaled Dragon's hide. These make expensive, but powerful swords. Other than that, they look like regular dragons. 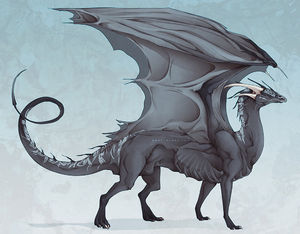