The Golden vein skill can coax a good discount out of a trader; but also requires charisma, storytelling ability, and a large supply of various treasure maps.

The hero leans confidentially over the counter and begins to tell the tale of the lost gold mine not far from the town. At the end, the hero furtively reveals the 100% genuine treasure map that the wandering prospector had pawned off. The excited trader accepts the map, giving the hero a great bargain in exchange. 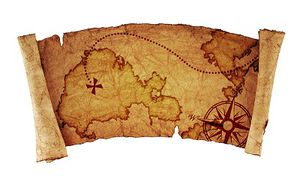 Level 1-5 The hero is able to get up to 10 extra coins on any one item he or she sells to a shopkeeper who feels sorry for them.

Level 11-15 The hero is modestly confident in his ability to steer traders. He uses his crafty powers of persuasion (occasionally backed by a "convincing" pet) to hock off items for slightly more than what they're worth.

Level 15+ Someone's been practicing! This hero has fine tuned his powers of persuasion and is even testing out some new techniques (like hypnotism) on the more susceptable traders. Not only is he able to get lesser items off his hands for a prettier penny, but also manages to get a good deal on decent armour by shaving a friendly percentage off the price. Nice!