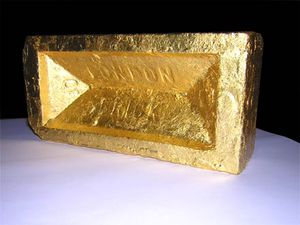 A brick composed of pure gold

Gold bricks are one of the most valuable items a hero can find. Only these are used to build temples. For a complete Temple, a hero needs 1000 of these rarities.

There's a multitude of ways the hero can obtain a gold brick:

Gold is considered the holiest of materials, though not the rarest, and has been since the beginning of civilisation. It is very unreactive (it's a noble metal) and so can stand up to the might of the elements (nobody wants their temple to fall down). It is also the most malleable and ductile of all metals making it easy to shape it into bricks. The only downside is that gold tends to very expensive and golden bricks even more so.

Symbol: Au (from the latin Aurium)