This rating is used to compare heroes in the pantheon of gladiatorship.

Spode  , the gladiator rating is decided by the following formula:

Once the formula is applied to the number of wins and losses, the decimal part is removed by rounding it to give the final integer rating, or it used to be. Now the rating is shown to 1 d.p. but when two heroes have different numbers of wins and losses but the same rating (to 1 d.p.), the second d.p. then is taken into account in the comparison and the positions in the pantheon are decided that way.

To understand the formula, let us use the method which was originally used to discover it, we are going to think about what we would do if we were going to make a gladiatorship rating formula ourselves, from scratch.

First of all, obviously of importance would be the hero's ratio of wins to losses; the main factor in all of this. We can mathematically write this ratio as a fraction:

Now we want to multiply this fraction by the total number of duels (W+L) to scale it up to what it should be; effectively applying the ratio to the total.

Then we multiply out the brackets:

This formula is now theoretically the best way to obtain a gladiatorship rating. However, in reality, there are fortunate (and/or skillful) heroes who have zero losses. If you tried to use the above formula on one of these heroes, you would find that you would be dividing by zero which of course is undefined, and so not viable if we want a proper formula. To sort this out, the easiest way is to add some number onto the denominator 'L'. We don't want this constant to be too large though or it will interfere with the final result too much. The true formula was originally discovered by working backwards to get this constant, and so the actual formula is revealed:

The impact of successive wins-versus-losses is best seen visually, as displayed in the following heat map produced by 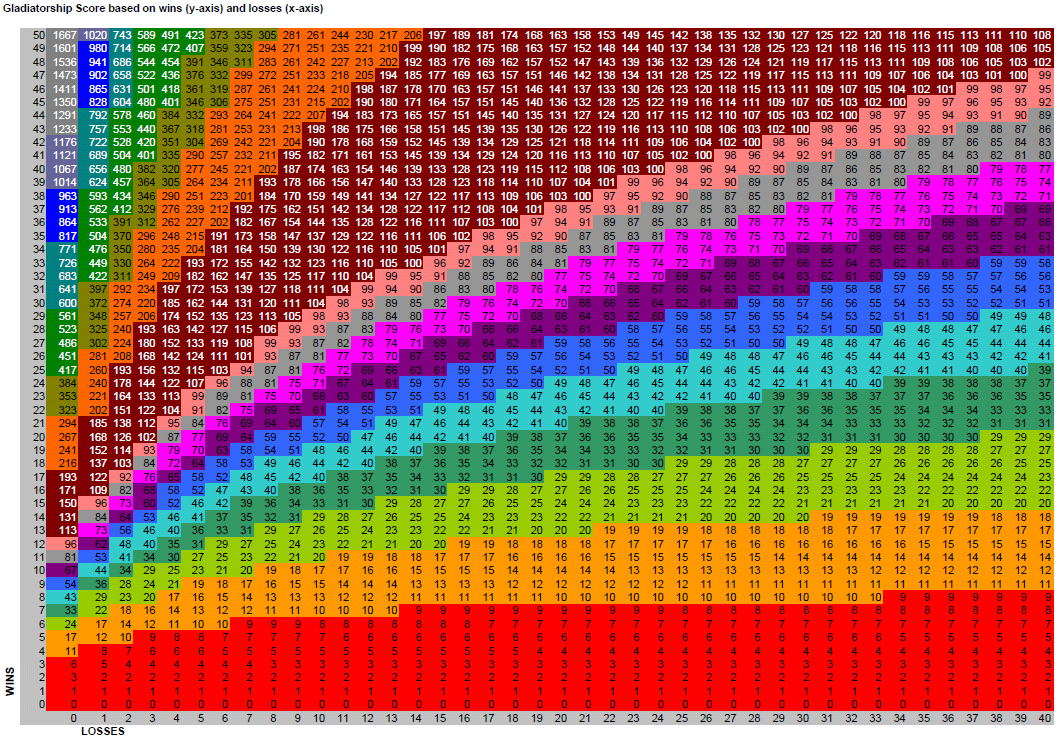