Difference between revisions of "Geek Squad" 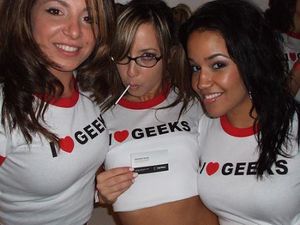 A relative of the Basement Dweller, this is not really a Monster, but actually a pack of 3, conjoined as one. The Geek Squad each have a body, but only the two at the ends have an arm. They are physically weak, but posses psychic powers. Using these powers, they control inanimate objects and use telekinesis to move them. Their superior intellect also allows them to create powerful weapons which they can use to fight. If they find themselves in a place with no objects and without their toys, they are able to use their Chakra to summon a henchman.

They dwell near cities like Anville or Tradeburg where there are tons of items for their inventions. Some make their own settlements near random Towns. So basically, near Towns. They fear nature and will do anything to avoid going in it. Heroes that know this will run in the woods to escape.