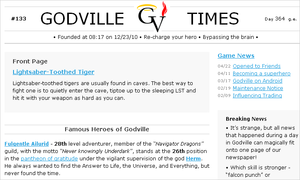 Fulgent's appearance in the Godville Times

Herm  , is a bumbling male hero.

His contributions to his guild, the Navigator Dragons, are mostly confined to wandering around drunk and shirtless through the woods, bellowing his battle cry, "Never knowingly Underdark!"

He describes himself as a slinky, valorous redhead, single and (always) looking, and is particularly proud of his shapely septum, most other parts of his body being usually covered in scars and scratches from monsters and his pet.

More about Fulgent may be seen on his profile page.

As of 7th June 2012, Fulgent has completed a temple to his god. Nobody is more surprised than he about this.