Find out who, what, when, where, why, and how

Find out who, what, when, where, why, and how is the first of two in a chain of mini-quests. It is rewarded with a wonderbox and followed by Go there, do that, get the t-shirt. The hero will encounter no boss.

There are times (and quests) when "42" is not a sufficient answer. This quest is such (a quest, not a time, of course!). How to solve this quest, then? While heroes tend to do so by killing monsters and more monsters, we shall think about each of the questions for itself: 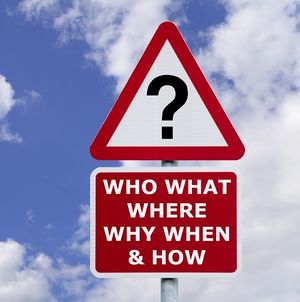 It's a long road to find the answers.

This means the party will take place twenty minutes after the beginning of quest of the quest Find out who, what, when, where, why, and how. With

where x equals the time of day and

one can easily calculate the exact time of the party.