The Fifth Elephant (Elephas quintum) is monster that is the sad ex-mount of the fifth 'horse' rider of the apocalypse, who was disowned by the four riders we have today for his unconventional choice of mount.

Blaming his trusted friend, the fifth rider abandoned the Fifth Elephant and set off to find a more suitable creature to ride.

Thus was born the Fifth Elephant, grumpy and disgruntled, it wanders the wastes crushing the hopes, dreams and spines of heroes unfortunate enough to meet it.

Some say that only its old master can calm it, others say that humble offerings of fruit may help. Yet others say it's too dangerous to look into and use that old phrase 'let sleeping cats lie and angry elephants crush you to death'.

The truth is that much is still unknown about the Fifth Elephant. One thing we know for sure is elephants never forget. This means that without some serious therapy, this monster isn't going to change. Much more research needs to be done on this hot headed monster. If you happen to run into the Fifth Elephant, stand completely still and hopefully he will think you are a tree.

The Fifth Elephant, in some point in the past, collided with the Discworld in the vicinity of Überwald. At that time, it was large enough that, along with its four siblings, it could carry a whole world on its back as it stood on the back of a turtle. The impact was of such a force that it bent reality, and a smaller, less beneficent and very, very angry Fifth Elephant drifted off through space eventually coming to rest on the grasslands near Godville. 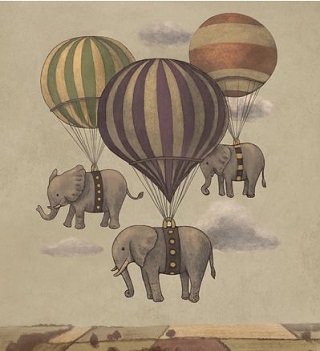 However we checked his medication, bought him a new sun hat and packed him off to somewhere a bit cooler.