If you want to edit this page, please ask

Yilinair   in Guild Council. She'll most likely say no.

ANNOUNCEMENTS FOR NOW Our guild forum

Fallen Angels is a guild where the wings of heroes and heroines (if they have any) are likely to be black, mostly because they are fried,I mean, gifted by their Great Ones' lightnings.

It is a place where evildoers are welcomed, but we also need many kind-doers to help balance out the lurking darkness in towns, like helping out puppies that had been brutally injured by certain evildoers... 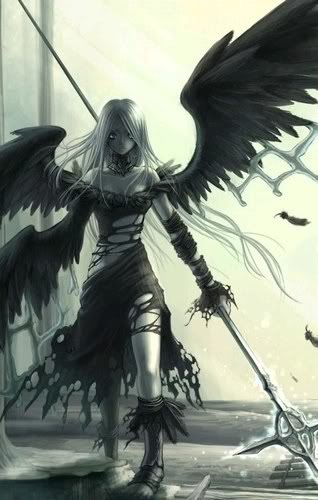 How to Join A Guild

(and better with a few lightnings, though not necessary)

To maximize the chance that your hero will listen to you:

When heroes are more likely to listen

Cancel quests to leave a guild

Simply command "Cancel/Drop/Abandon/Stop" to stop him/her from leaving the guild, works better when heroes are not selectively deaf

Not much is known about Yilinair, the creator's goddess, besides that she tends to take on the form of a very cute and evil being: a black cat. So as one day the heroine is making her trip through The Forgotten Forest (a legit location in Godville that can be found in some maps), an idea like a lightning, or it could have been vice versa, struck her. The thought of creating a guild, quite literally, exploded in her head.

As she fought monsters, drank booze, cut lines to the doctor, and polished her equipment for three days and three nights, she finally noticed that the percentage on her progress bar has reached 100! In a jumble of random twists of ideas, the guild Fallen Angels was given birth to.

We strive to be the evil heroes and heroines of Godville and maintain an evil alignment but good heroes may also join. Punishments can help contribute to our evilness.

The Origin and The Actives