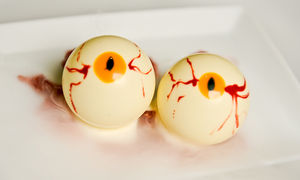 A quiet but massivly irritating screech can be heard, as the hero gains practice in an unwavering stare.