Difference between revisions of "Exhaust of the dragon" 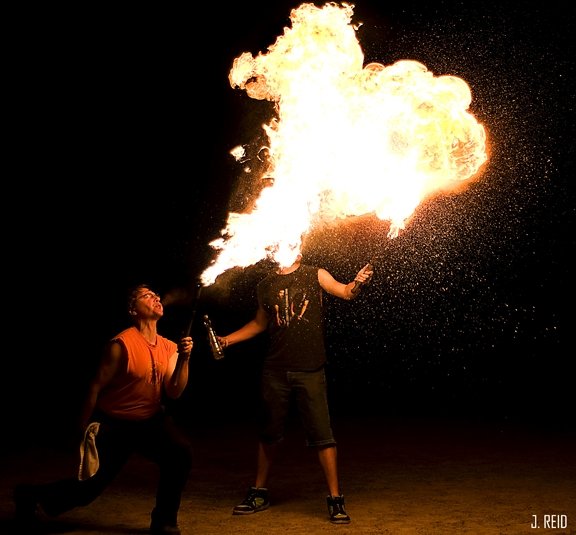 Most folk who are not familiar with the skill "Exhaust of the dragon" assume that a practitioner would breathe fire out of their mouths. Those that have learned the skill know just how wrong that is. But in order to avoid embarrassment when using the skill, you will often see the person bend over slightly and open their mouths. What actually happens is known in semi-polite society as a "fart". The exhaust of a dragon is a fragrant collection of smells intended to lie an opponent low. The skill gets its name from those that have shown mastery in it's execution and are able to emit a sound that very closely imitates that of a dragon's roar.

Those first learning this skill start with a slightly modified diet. Consisting mostly of nuts and tree bark (usually without salt since the gods seem to be a little stingy when it comes to spices.) This highly fibrous diet helps the hero develop and trap the necessary gasses to practice this skill.

As the hero becomes accustomed to the new diet, other more exotic vegetable matter is added to meals. Most heroes are eager to start adding more variety to their diet. That is until they find out how much chewing is involved. At this point it is also possible to change the "sound" involved, usually by careful choice of mealtime additives.

A hero who reaches this level of skill has a digestive track able to handle just about anything. And just about anything is what they eat. The more varied and exotic the diet, the more varied and exotic the "exhaust." The "roar" of the dragon starts to become evident and a hero with a pet often finds the pet fleeing battle after the hero has used this skill.

At this point a hero rejoices in their mastery of this skill. They have finally figured out how to use the bubbles in the beer they drink to power up the gases mixing away in their intestines. When a hero of this level lets out the "exhaust" everyone knows it. The "dragon's roar" has also been perfected and the hero now has the ability to silence the sound at will. Most pets are happy to avoid the scare of the "dragon's roar," until they find out just how deadly the "exhaust" can be.