Difference between revisions of "Evil Giraffe"

The Evil Giraffe (Camelopardalis malum) is a regular giraffe gone wild. These even-toed ungulates were born evil due to a massive coma.

Scientists found out that it was all because they landed on their head upon birth. Growing up, these animals became worse and worse. They spat at tourists, chased elephants, and pooped all over watering holes. Once mature, they sought other gone-wrong giraffes to mate with. This selective breeding made new generations of Evil Giraffes. Then, the cycle repeated itself. Every generation of Evil Giraffes became more diabolic than the previous one.

Note: It is rumoured that some evil giraffes can transform into either a camel or a leopard. 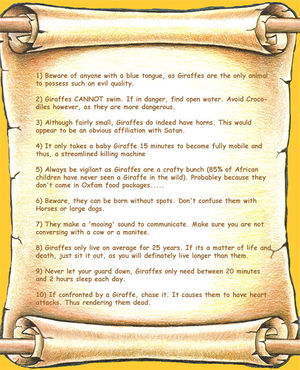