People began to wonder where some patients who entered the monster's eye clinic went. Eventually, the numbers of missing people rose to a substantial amount. This was enough to attract the attention of the authorities. And, after hearing the terrifying truth of this monster, said authorities began to encourage heroines to slay this beast. However, the monster always offers its attackers to have a free eye exam. So, if the heroine has vision problems, it's an instant win for the monster. This makes beating this monster difficult if the heroine allows it to give her an eye exam instead of refusing, since most people, especially heroes, don't have perfect vision. 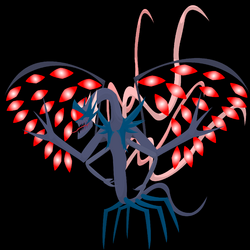 The Eternal Optometrist, being a soul-eating monster, may seem to be impossible to defeat. However, outside of its extremely dark and spooky diet, its relatively easy to beat since it doesn't have any other abilities. It will also not eat the soul of a heroine, or any "patient", if she refuse the eye exam. This is because the monster will not eat a victim's soul until it can diagnose a vision problem. But fair warning, if it is annoyed enough or extremely hungry, it may not care if the heroine has perfect vision or not and will consume her soul anyway. Also, if it is defeated, it will come back eventually. The Eternal Optometrist always comes back.