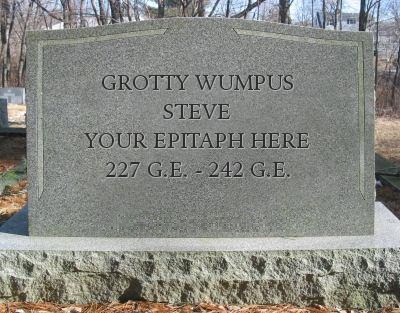 The chisel is mightier than the sword.

Epitaph writing is one of the most complicated and challenging skills for a hero/heroine to master, relying, as it does, on so many contradictory abilities: manual dexterity, physical strength, unwavering certitude (or clairvoyance for the lucky heroes), nimble wit, keen insight into monster psychology, and, of course, stonemasonry.

Training can take several years. Heroes tend to quickly develop the necessary physical prowess, but the mental aspects of epitaph writing often prove challenging for them. At its core, epitaph writing forces a hero's opponent to confront its own mortality. The hero must quickly size up each monster's insecurities, choose an appropriately humiliating cause of death, and loudly proclaim it in the monster's presence with enough conviction that the monster itself believes it to be a true prophecy.

With experience, the hero hones his wit, and is eventually able to encapsulate the enemy's entire life and shameful end into a brief inscription that can be quickly inscribed into a tablet. Heroes who achieve this level of epitaph writing mastery are nearly unstoppable in battle, since even monsters know that once something is carved in stone, it is permanent and unalterable. Heroes who decide to truly master this skill must purchase and carry mallets, chisels, and blank tombstones with them while walking hundreds of miles as they complete their quests, which means this is not a combat skill for the weak! Apprentice epitaph writers often choose to quest near quarries or in mountainous regions where stone is readily available until they build up the strength to pack blanks.

However, those heroes who commit themselves to learning this ancient discipline can inflict profound psychological and physical damage upon their enemies.

At these early stages, the hero mostly writes epitaphs on pages ripped from his diary and reads them aloud to opponents. This creates a feeling of general disquietude in the enemy, as might arise when one spills salt, or breaks a mirror. Whilst the monster is momentarily distracted by crossing its fingers and spitting three times (as required by superstition), the hero is able to land a crippling strike.

Written epitaphs in these levels create an increasingly debilitating sense of dread in the enemy. Foes may sob uncontrollably, have difficulty wielding weapons due to trembling, curl into a fetal position, or even feel impelled to flee the battlefield.

By this time, heroes have acquired enough chiseling speed and dexterity to complete rudimentary stone carvings on the battlefield. Given the duration of the average fight, only brief epitaphs can be achieved at this stage. Masters call these inscriptions forks (thought to derive from a type of rhyming slang, where fork = pickpocket = hic jacet), and they commonly begin with the phrase 'here lies,' as in: "Here lies the dust of Steve, once a Grotty Wumpus, now weed feed." The chill that washes over the adversary from the sight of its own tombstone can cause body temperature to plummet so low as to induce immediate torpor. Other common reactions include panic attacks, shock, and temporary paralysis.

Only the most skilled and dedicated masons with the greatest perception and fortitude achieve these ranks. Very few heroes can cultivate the mental acuity needed to write epitaphs at this level, as they are typically better suited to learning distance belching, seed spitting, and armpit music. Some heroes have been known to meet unfortunate ends trying to sharpen their mental skills with their own chisels, despite clear warning labels glued to their tools. However, once achieving these levels of proficiency, Epitaph Writing Masters can mete out swift and shameful death.

When faced with Level 21 epitaph writing, enemies are instantly paralyzed as they read the pathetic means by which they will meet their demise. Vivid hallucinations follow, wherein the monsters watch themselves die in the manner prescribed, first in real time, then again in slo-mo, super slo-mo, and a series of aerial views provided by the Molotov Responsibly Dirigible. Each level above 21 causes the visions to replay from additional angles. During this time period, heroes can either move in for a killing blow, or, as some of the more evil heroes prefer, wait and watch while their adversaries die of horrific embarrassment.