The Drinkerella (Regina ebrius) is a humanoid monster that wanders the outskirts of the castles they live in, having snuck past the castle guards after a night of heavy drinking.

There are several ways a Drinkerella can be brought into existence, but the most common origin is as follows: a young woman hastily marries into nobility, and after some time passes[1], the woman becomes bored and unhappy with her new husband and life as royalty, and is inflicted with a condition known as 'alcoholism'[2]. Over time, her alcoholism will fester and grow to the point she can't control herself and her actions, and will regularly become heavily intoxicated, which causes her to leave the castle to seek out strangers with belligerent intent. 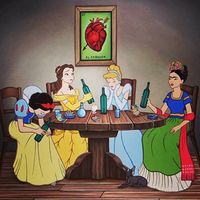 A group of four Drinkerellas gathered at a tavern