The Dreaded Gazebo (Gazebo metuendaque "dreaded gazebo") is a monster that is unassuming but deadly.

While in actuality, based on extensive research, this creature is in reality very docile. It loves to keep its own private garden, the most famous being so fabulous it was entered into mythology as Persephone's Garden. To protect this garden when the Dreaded Gazebo is not around it grows Jupiter Fly Traps, which are much larger than Venus Fly Traps, to eat unaware heroes. 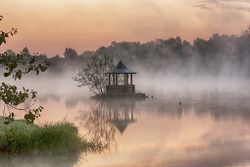