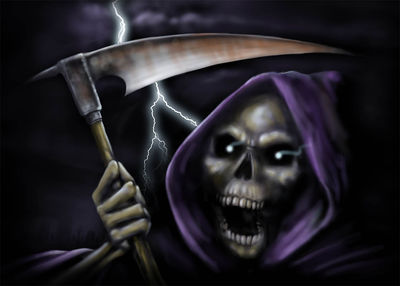 Death - the total loss of all Health, or alternatively a hooded skeleton with supernovas buried in its eye sockets, wielding an agricultural implement.

When a hero is slain by either a monster or their god, their soul hangs about around their body waiting for a divine helping hand. They still retain their senses and can horrifically smell their bodies rotting and grimly watch the maggots infest them. Their equipment starts to rust and they are able to do nothing but watch in despair. Eventually their body may be discovered and prepared for burial but their god usually has helped them by that time. After death, a Hero loses all their gold and loot. This death is recorded in their death count forever more. Thankfully, quest progress is not reset upon the hero's death, and the god does not lose any godpower. After a while, heroes get used to dying and see it as a little afternoon nap, some even start to enjoy the momentary rest from all their questing. The oldest heroes have been to hell and back hundreds of times in fact.

Pets also are by no means immortal. When a pet dies, nothing happens to the pet or anything else as a result. Unfortunately, resurrection of a pet is much much harder then for a hero so be advised that prevention is the best cure for such problems. If the pet isn't brought back to life after 60 hours, the hero will have no option but to hold a small funeral; the pet is then lost forever and is removed from the hero's stats. The hero can then tame a new one but hurtful memories of the dead pet will linger on for quite a while afterwards.

Death is never much of a permanent problem when you have your very own personal god. To find out how bring your hero or pet back to life, see main article.

It is possible for a god to induce their hero to commit suicide. The voice command is simply "die" and will work while the hero is traveling or questing. One of the reasons a god might wish death on their hero is that there is an achievement for it!

A hero's death total can also be randomly subtracted or added when opening artifacts such as Myster Box.