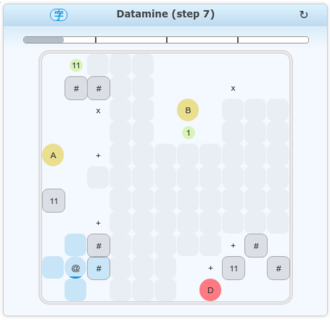 Collisions occur when a boss tries to enter another bosses tile. When bosses collide, both bosses take damage and are pushed away from each other, moving four to six tiles in a straight line. If a high-speed boss monster hits an obstacle, locked bits, or another boss, it will stop early and take extra damage. Bosses do not collect bits, medkits or thrusters on their way when pushed. If a boss hits hit an obstacle, the obstacle is turned into an empty tile, locked bits hit by a flying boss are turned into bits. If a flying boss hits another boss, that boss is sent flying in the same manner on the next turn. When a boss is pushed by a collision with another boss, there is a chance it will lose one bit, and a bit will appear on the tile it was pushed from.