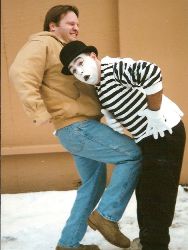 If you see such a beast approaching, be sure to make good use of your Laugh Track - an anathema to those monsters.