...when you open the Godville forums firstly and you notice: There is more...

...when you read through the topics and you see: This is not a ZPG! There are other gods out there!

...when you see a question, a sentence, an exclamation and you think: I can answer!

And then, the following weeks, you just sit there, writing, waiting for an answer, for a new topic, and you feel happy...

...until it is there. In black, clear and evil letters:

If this is your biggest fear, then you are right here, right at the Confessing Spammers!

In the beginning there was nothing and nothing disappeared and - for some reason - there was everything. This happened during a moment called "Big Bang", the metaphorically[1] loudest "Bang" in history. Soon a group of people appeared to worship this moment. They invented a word, "spammer", which they found a very funny word and because they always took the most ridiculous idea of all, this suggestion was being taken. They also wanted to become a religious group (taxes, you know?) and, to point this out, they finally settled their name: Confessing Spammers.

But then there opened a gate, a gate of new possibilities: a gate to Godville... In Godville they met many strange things... They saw "heroes" building temples for their gods and they saw the gods sitting on the clouds and punishing their heroes, and so, when they were asked to decide between being a god and a hero, they chose to become gods. They also noticed another fabulous, great and wonderful invention: The Godville Forums!

Then they knew: This is our place. Here we belong.

But dark times followed, and the Confessing Spammers became unknown and forgotten. Long they had been important, long they had been mighty, but this had been long ago. They were a wreck, nothing more. Ruins, where their headquarters had been. Nobody had ever heard about such a group. The only ones to keep their memory were the - for many heroes annoying - talking donkeys, a creation done by the old Spammers, a sign of their long gone might. They had kept their memory, and it was the case that they told two heroes this old story and the heroes did, not knowing what else to do, write this into their diaries. And this was read by the young gods

The Wyvern God   and

The following definitions are needed to understand the next paragraph:

best: The most capable member concerning one aspect. If there is no aspect defined, it can just be left out.

ever: Referring to the philosophy of Immanuel Kant, time and causality are just subjective quantities. Thus "ever" has no meaning here.

After usage of the rules mentioned in the definitions above, we get:

Bonuses in the infiltrated towns

This happens often, every hero experienced it yet... How could them be helped?
It's so easy with Confessing Spammers' Health Care! Free medical care in all towns we own, umm, are known in...
But our help contains another offer: Better equipment! This means less damage and thus less wounds! The heroes will not need to return to town that often anymore - that surely is a bonus scarcely to be replaced!

!The Ineffable's Diary↻
9:46 Toto suddenly rushed in front of a runaway cart to rescue a child. I explained to the amazed onlookers that this was standard dandy lion training by the Confessing Spammers guild. They will be talking about this for some time.

Yes, we offer free and individual pet training, for any pet you have, let it be a sun dog, a philosoraptor or even a godvilla ... no problem for our widely experienced pet coach,

So, if you are not convinced yet, there will be hardly a way to convince you!

Despite being level 12, there are a few things you should have a look at when trying to join us:

So, when all of this is the case, you may tell your hero:

Because the probability that your hero listens to this god voice is only 30%[3], it may take a few attempts to get your hero to join our guild. He then will start a special quest that ends with your hero joining the "Confessing Spammers".

Sometimes, your hero will, in a seizure of mental blindness, want to leave this guild and join another one. In this case you should just tell him:

He will try this about seven times[4], until he reaches cardinal rank. Then he is convinced of this guild being the only right one. 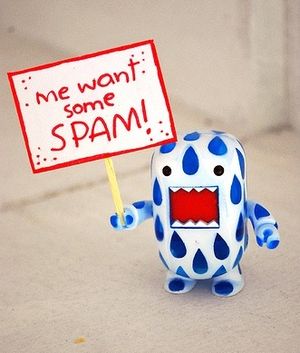 After three days of being a spammer, you have a new possibility to spam: The guild council! This place belongs just to us; it is like the chat with a lot (well, at the moment a few) good friends! But, as in any conversation, there have to be a few rules:

Our one and only: The Godville Forums 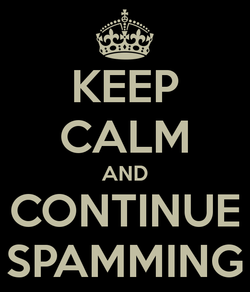 The forums: Here we belong! They are our fix star, the sun Godville is spinning around, our Meaning of Life! Main square, workman's area, guild headquarters or flame lounge - it is unimportant where you post!

It is a strange place... Gods meeting here, through time, space and four hundred ninety-six minor dimensions[6], to talk, help others, change the world or just saying weird things about other gods.

Somewhere between the eighty-first and two hundred and second dimension[7] is the main square of Godville: The perfect place to meet other gods, unimportant if you need help or just want to talk - here are you right with any stuff related to Godville!

Unhappy with the world? Change it!

Doesn't virtual life work as it should? Do you have got a simply awesome idea? Or did your hero say inappropriate things? Come here if you want to wield the verbal hammer and make this world to your world! This is definitely a place you should contribute in!

Role playing is the name of the game! Become acquainted with gods from other guilds or keep our personal forum thread alive and on the front page! Drink a beer at the bar, talk with your "good ol' guildmates" and just relax!

Build up a character! Give him a personality! And let him become alive...

These words might become words for eternity one day. These words are the foundation stone our headquarters are build on.

Imagine a small, round hall, covered with a dome. Marble, gems and glass are the things it is build of. In the middle is a dining table, covered with food over and over, next to a bar, because what was a guild headquarters without drinks? Try our Spammed Wine! And above this all, hanging down from the dome... A shadow on the table below... A wyvern, dead and stuffed...

On 1584 g.e., one day after the building was completed, PutInNameHere gives a negative example of using a do it yourself cocktail bar. The guild hall was repaired, but it was never the same again...

So: Welcome to our headquarters! May the conversations never fall silent!

Caught in a little hole near the (lilac plaid) three hundred thirty-eighth dimension, the Flame Lounge is being spammer at night and day! Find out more about your divine friends by asking questions or do other weird things!

PS: This thread should be dedicated to us...

Will you stay or are you just visiting us? Nevermind, you should have a look at our gift shop (the small building next to our guild hall) either way!

Our offer is a bit small at the moment, but we are really trying to enlarge it. So if you don't find the right thing yet, try later!

As everywhere, you might like to look pretty good, very serious or just kind of special in the forums. You do this by changing your so called Gravatar. And this is, how it works:

If the part concerning participation hasn't answered all your questions yet: Read about the pantheons.

Pantheons are a way to compare heroes and guilds to each other, heroes because of number of experience, rating of chronicles and many other things, guilds in only three categories:

The following short texts will give you a little information about our relationship to these pantheons.

The Pantheon of Unity

The ranking in this pantheon follows a complicated formula[10] you can have a look at here. It mainly depends on heroes joining and leaving a guild, so there isn't an effective way of rising here.

The Pantheon of Popularity

Taken from the Godville times[11].

On 1633 g.e., the Confessing Spammers did get a ranking in this pantheon. After having reached five members, this guild had become big enough to get 1% - this may not sound a lot, but for us it is - in Monsterdam. We quickly lost this again, but since this date we have often gained some influence in towns and maybe we once will be capable of maintaining a percentage.

This pantheon has the highest priority among us. We fight, win and loose, obtain bricks, gold and honour, get happy and get annoyed!

This can be seen in our ranking, too: At the moment[12] we are 45th in this pantheon, and we're giving our best to become the best! 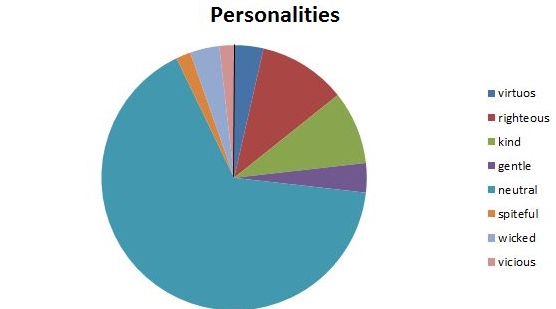 This statistic was created on 1692 g.e. and it clearly shows that the majority of our guild members is neutral. Where does this come from?
Many gods don't check up on their heroes eagerly. As heroes tend to become neutral[13], this is what happens. 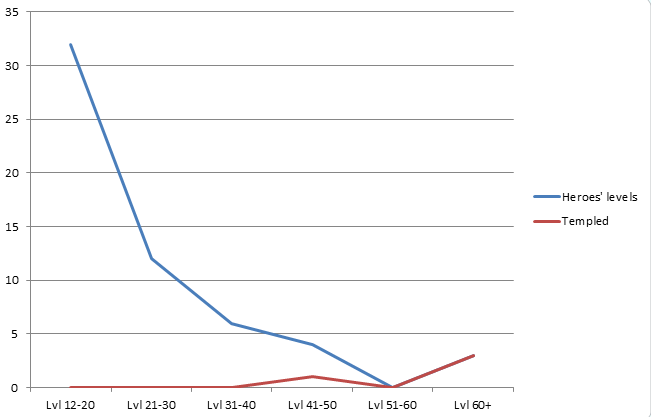 This diagram (also made on 1692 g.e.) is easy to interprete: The average level of our guild is 23.9, which is - I daresay - rather low. This, as well, is not very difficult to explain:
Many elder gods stay in their guilds until infinity (they're gods, whatelse should they do?). They won't change their guild at all, maybe they even founded it. So the ones to be recruited for a youg guild are the young gods: They aren't sure yet whom to join and just test it out, maybe they go for the careerist-achievement. When they grow and - so to speak - become one of the elders, they mostly make the decision to stay in one guild - one day this might be us. Until then we will have to wait. 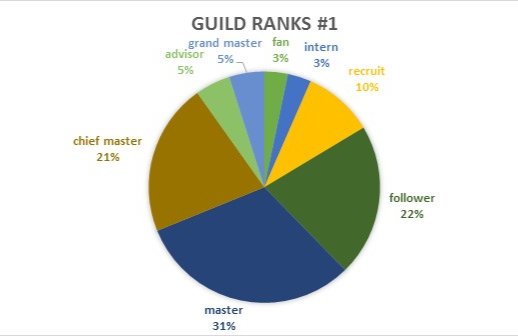