Difference between revisions of "Clinical strike" 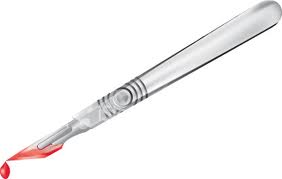 You'll need one or more of these...

The Clinical strike is hard to perform but a useful skill for a hero to know of. It cuts deep into the fleshy bits of an enemy and is especially useful for performing dissection demonstrations to a live audience.

Taking the #11 Scalpel, make a major lateral incision across the chest of the enemy. If you haven't already put the patient on anaesthetics, don't bother; after all, the patient is the enemy.

Take a hammer and break the patient's ribs, very subtly though. Lift them away to reveal the heart and at least attempt to remove any splinters of rib that have punctured the lungs (don't be harsh). Don't worry about the lungs; the next step is quick anyway.

Take a common kitchen knife and plunge it in to the heart around the region of the right ventricle. You may now chant some psalms to Jupiter before proceding to inspect the patient's entrails in order to make a prediction about the future. Now make sure there are at least twelve vultures in the sky before chanting some Etruscan prayers (the usual ones that every Haruspex knows, don't try anything too fancy). Now, to honour Quetzlcoatlus, you can chuck the corpse down the steps of your temple (you did perform all of this on top of a certified Aztec temple, right?).

Lick the blood from the ground. This step is purely optional, but recommended if you want to scare people.