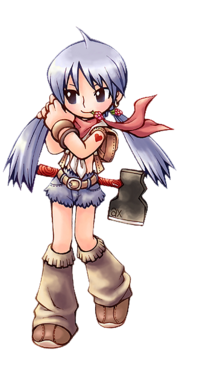 The Chaos Forger (Chaos malleator) is a monster that was created due to the lack of dedicated smiths for a dark and ill-reputed hero of Godville. It seeks to forge only the most powerful weapons, and sometimes - by flaw or fate - its creations run amok as critters of all shapes and sizes. Its strengths and weaknesses depends on the form it uses to fight the hero. Has been reported to use the heroes own skills against them. This has not been reported succesful though. 10:39 p.m. The Chaos Forger tried to use the “poisoned kiss” skill, but failed. I quickly showed it how it was done.

There is a legend about this creature, how it is not the only of its kind. Well, to be truthful, the other Chaos Forger is a deviant blacksmith that spawns all sorts of miscreants, solely to cause havoc for the hero along their journey. This blacksmith may or may not be one of the Demon's own creations.