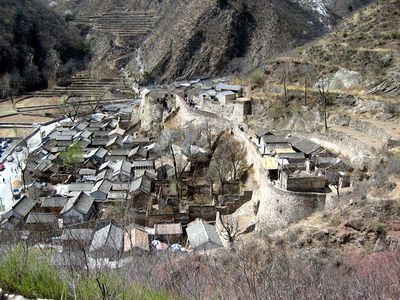 The residents of Bumchester frequently find themselves in a self-imposed seclusion. Their acute embarrassment is solely attributed to the fact that their faces look, almost exactly, like a huge pair of arsecheeks. Their noses are tanned, brown, by the scorching sun. Giving most of the residents the appearance of a rather large, walking posterior, mid flow... so as to speak! ( Pinching a loaf, to the rest of us! ;) ) As a result, the residents underwent a long period of time after the departure of the Bumms (see below) during which they had no contact with the outside world. Written records of contact with Bumchester residents is thus equally scarce. One of the earliest and only known references by an outsider to Bumchester came in the form of a torn diary page bought by an historian in Tradeburg. The entry contained only two lines:

Bumchester is nestled in a fertile valley a mere ten miles from Godville. Because of the high sloping mountain walls on two sides, the area receives plenty of rain and was known by early nomads as a natural source of fruit trees and other edible plants. After it was settled, the buildings helped to channel the rain water into filthy gullies, which carried the healthy loam and fertile dirt away, leaving behind only muddy gutters. Today the rains still keep the valley humid and cool, but greenery is limited to small grasses and hardy vines.