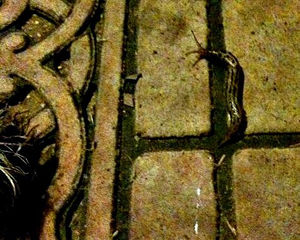 A rather small (5 inch) Leopard Brain Slug crawling over the doormat, as a furry hungry Grue creeps into the picture.

The Brain Slugs Farm has the largest monster-to-human ratio in Godville. Despite the name, there are hardly any Brain Slugs in the area. The farm is, however, home to more than 200 Glowing Grues per square mile.

How did this mysterious farm come to be? Why are there no Brain Slugs here? Who would be sick enough to make this place? Why am I asking you all these questions? I have no clue, but let us plow forth...

Thirty years ago, after a Mad Scientist did what he did and made what he made, a lowly farmer decided to do some research. He needed oil to power his machines, but didn't want to ruin the planet, so after looking endlessly for a new source of fuel, he found the Brain Slugs. These mysterious creatures produced some foul smelling slime. After realizing that he could make the slime into fuel, he decided to raise them.

What he failed to realise was that these are called brain slugs for a reason. Soon, the farmer was found dead with a hole in his head. They kept multiplying rapidly and overtook the farm.

City folk had to construct a huge wall to keep them all inside the farm. The slugs kept mass producing the slime and eventually the stench leaked outside the wall. Glowing Grues loved the smell and were drawn to the source like a magnet drawn to steel. In no time at all, hundreds of grues were attempting to knock down the wall. They failed miserably and decided to simply climb over it.

Once inside, they saw all that delicious slime everywhere. After devouring the Brain Slugs, they found that they could no longer get out. They were too fat and heavy to climb on each other and escape. Fortunately for them, they had a few Brain Slugs that they missed inside the farmhouse. They decided to take it upon themselves to raise the slugs and survive until they lost those few extra inches.

After spending some months doing cardio and strength training, the grues were able to leave the premises. Using some bombs, the grues demolished the walls. Instead, they used a dome shaped... dome... to keep the slugs in. They kept breeding these animals to use as a food source for any grue interested.

No longer will Glowing Grues have to wander the land in search of food. Now, any poor grue that can't afford a good dinner will come here and eat for free. It's been described as "The Homeless Shelter for Grues" by many citizens.

Some grues consider this place to be holy. Humans are not welcome in the area because of their "untrustworthiness". If a hero was to start a fight, all the grues are to pitch in and help the victim. Heroes that pass by this area are warned not to start a fight with the monsters.

One hero wrote the following: "I watched some other guy get drunk and come over here. He started a fight and EVERYONE jumped on 'im. I had never seen such unity in the monster world. The guy didn't last two seconds after that. They strangled him, beat him, kicked him, it was brutal. Then he died." Let that be a lesson to all you heroes out there.

It is in the area 2 miles away from Los Demonos, so heroes tend to go past here at some time or another, though sometimes on the way to Deville.

The Brain Slugs Farm covers several acres of land. There is a large farmhouse southwest. This is used as a shelter where the grues can rest. The rest of the land is used to house the Brain Slugs. These are then fed to the grues.

The land itself is very dry and arid. There are few trees, no water sources, and few roads. Sandstorms occur all the time and rain is scarce. If anything, this resembles a wild west movie.