Box with a question mark 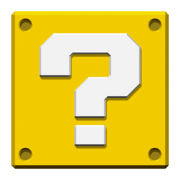 Seek and you shall find.

The Box with a question mark was probably born when some shady trader decided to appeal to our heroes' sense of gullibility. Not many people considered this artifact as special but when a chubby Italian plumber began his quest to save his girlfriend from a giant turtle, everyone saw what the artifact did, and boy were they amazed! Since they saw him grow in size and strength by eating the box's contents, all of the heroes began searching for these boxes. Unfortunately, the box worked differently for the heroes, probably because it was not used to being carried away in a bag by scruffy little good-for-nothings. It seems the effects differ for all heroes as indicated below.

!Hero's Diary↻
07:22 Felt a burning desire to open the Box with a question mark. Found inside something unbelievable — a scroll with instructions on how to get a premature level up!

!Hero's Diary↻
12:01 Suddenly felt like I had to make use of the Box with a question mark. Shook it as hard as I could and out came a new, shiny golden brick!

There are many possible outcomes of activating a Box with a question mark.[N 1]