A guild loosely related to the Black Order in the anime D.Gray-man. The Black Order is a guild for those who follow the path of light, all players including alts are welcome.

The Black Order was originally founded by a group of generals who opposed the Fifth King's Tyranny, and a certain bored God, Kraddi. This underground group protects the citizens of Godville from the darkness, where law and order cannot be used. After enduring the King's actions for a year, five generals within the royal army decided this cannot be tolerated any longer, but doing anything openly would cause instability within the kingdom. The generals would hold a meeting every week, discussing the issues of most concern and a way to resolve them. As more meetings were held, more people with the same views as the generals wanted to join the cause, and thus a guild was born. 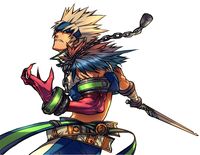 The leader of the generals who founded the guild, Koufuku.

Honesty, integrity, and compassion are our main values. We aim to preserve these views as the guild grows, or when the guild head has been changed.

The guild council holds a meeting every week to determine which citizens are truly in need of our assistance, the method of assistance is decided after a meeting is arranged with our target. Underheanded methods will not be tolerated.