From GodWiki
Revision as of 07:33, 4 March 2012 by LusciousToad (talk | contribs) (How to stop your hero from joining another guild...)
(diff) ← Older revision | Latest revision (diff) | Newer revision → (diff)
Jump to navigation Jump to search 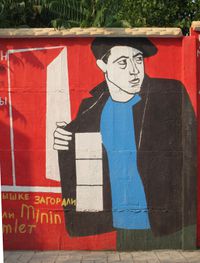 Are you tired of sub-par weaponry? Are you still wearing last year's armor? You frequent the shops of Godville, but never can find something good enough. Looking for something...more? Ever wonder what's kept in the "back room"? If you're the kind of hero that's looking for special equipment and willing to...look the other way and not ask too many questions... then the Black Market Guild is right for you!

The Black Market Guild is a loosely knit organization of adventurers that are skilled in the mercantile arts as well as self defense. They come to the aid of fellow guild members and provide information on buying and selling specialty goods on the black market. Membership has its benefits; just look what some of our members are saying:

The Real Worm: "The trader was impressed by my Black Market Guild badge. He gave me a Bionic commando's arm for free"

Amurui: "The trader was impressed by my Black Market Guild badge. He gave me Concrete boots of agility for free"

• If you wish to join our ranks, send a voice saying Join the "Black Market" guild while your hero is outside a city until the hero decides to switch quests. Do not cancel your current quest first.

• Should your hero be foolish enough to start questing to leave us, aside from punishing the insolent whelp, we suggest that you tell them "This quest is lame! Stop doing it!". Usually, with this sentence your hero listens to you at once and looks for another not lame quest.

• Whenever possible, members should try to boost the influence of the guild in the town they are in. This is accomplished by performing miracles in the town.

• Towns are a great place to try to melt 3000 gold coins into bricks for your temple. Contrary to popular belief, it doesn’t improve the odds to have over 3,000 coins. As soon as you have 3,000 and your hero enters town you may use encourage or punish to try to get a brick.

• The reason to do it in town is that your hero may increase our guild’s influence there (increasing the chance for all of us to get free loot and bragging rights). Simultaneously, you increase the chance of getting loot for your “active promotion of the guild” when you visit a town again.

• Note that Godville is the least useful town in which to try to build influence, because the influence there is fleeting (every hero goes there every day, and they all work to negate your influence).