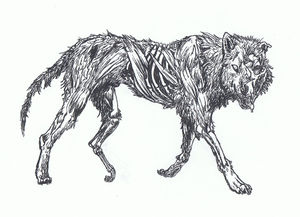 The Biowolf (Canus mutata) is a tamable monster. "Not quite of this world" is a phrase often applied to any spacy, concussed or drunken Hero, but it's most appropriate of all when used to describe a Biowolf.