Big Bad Bed Bug(Cimex Magnus Malum) is a vicious monster. It is a human-sized bed bug that makes any other monster hiding under a bed look tame. Based on its typical behavior, it is believed to be strictly nocturnal.

During the night, when an unsuspecting victim is sleeping, the Big Bad Bed Bug will sneak up and attack. Usually, this monster will violently pull its victim out of bed and throw them around like a rag doll. The monster will not stop until it knows that its victim is dead. Then, the Big Bad Bed Bug will proceed to eat the now-dead victim. If the victim is sleeping in a sleeping bag, the monster seems to think the sleeping bag is part of the victim's body and will proceed to attack them while they are still in their sleeping bag. 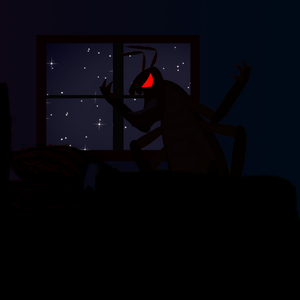 A Big Bad Bed Bug hired to attack an unwanted hero in Monsterdam. This occurred in an inn and the hero had to be resurrected.

Sometimes, residents of Monsterdam and Monstro City will hire this ferocious creature to remove unwanted heroes (Ones who broke laws in their cities, usually) by assassination.

Fortunately, for anyone who encounters the Big Bad Bed Bug, this monster has one fatal flaw: a complete lack of intelligence. Its inability to reason either makes it unable to tell that its victim is dead (Meaning its beating up a corpse) or it is extremely predictable and easy to strategize against. Another way to stop it is to prevent it from attacking, and is why many inns and heroes use a specialBig Bad Bed Bug Repellent. Like other insects, bug spray is enough to keep this monster a safe distance. Fortunately for it, however, its surprise attacks are typically frightening enough to make its target panic, making them unable to think reasonably. Another issue is that many underestimate its intelligence, despite it not being smart in the first place, and it may make quick work of overconfident or arrogant heroes.