Stories of Beerserkers are as old as beer itself. They talk of beer brewers which devotion ran do deep they denounced all gods except Beer. In punishement god of parties, Dionizos, chased them from their brewhouses and he forbade them making their own beer. Lost brewers couldn't take separation from their beloved liquor and they became first beer-seeking warriors. Tales of heroes and heroines that forgot about their patrons in a bout of alkoholic ecstazy. Whispers of warriors so depraved of alkohol on their AA meetings that at the barest of mentions of beer they go into uncontrollable rage. 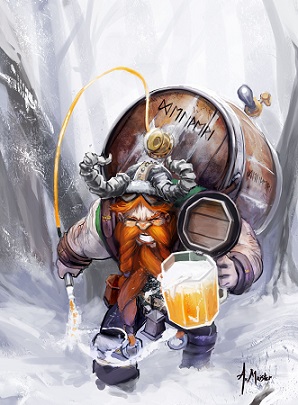 Beerless Beerserker is almost unrecognizable. It appears as rather docile, if big in stature, horned warrior who will follow hero with hopefull expression. But do not be fooled by it's placidness! It's a tactic that leds lost Beerserker to the nearest tawern and lets them regain their power!

First, hero has to relinquish all his beer possesions, so Beerserker is busy drinking and leaves them alone. All beer conesers agree that flavour of even poor quality beer is better than old faint beer scent heroes exclude.