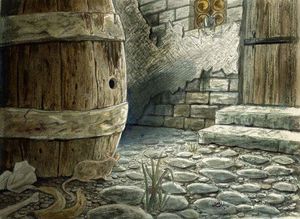 Beerburgh, officially the Hamlet of Beerburgh, is located at the junction of the River Kraktor and the River Stinks and is considered the 6th most populous city of the known realms. It has a resident population of almost 3,000 but this number balloons to over 8,000 during the Beer Festival months. Most of the buildings that dot the hamlet are either breweries or inns with microbreweries, giving this town the inhabited world's highest per capita density of intoxicated people.

Due to this, an Aura of abstinence is needed to visit this town without any risk due to the fact it blocks the temptation of beer:

Beerburgh used to be an Elvish settlement known as Kheebler, populated by peaceful Elves intent only on baking superfluous amounts of breads, biscuits and pastries. In the Great Elf-Dwarf War though the Dwarves cunningly doped the baked goods with Dwarven Ale, the most potent form of alcoholic beverage in existence. While the Elves were in a hapless stupor after eating the alco-cookies, the Dwarves invaded and easily captured the hamlet.

Converting the bakeries into breweries, the Dwarves renamed the settlement Beerburgh in honor of their resounding victory over the intoxicated Elves. While the Dwarves were themselves drunk celebrating their victory, however, the Humans stealthily invaded and quickly captured the town from under their noses in turn. Since then, the town has become the key bastion of beer and other alcoholic beverages in the known worlds, with some of the strongest lager being available in copious amounts and exported on a monthly basis to other settlements throughout the realms.

In its early days there was a municipal problem with violent drunkenness, but fortunately the town contrived to send its population's more thuggish elements off to Beer Bay, which swiftly solved the issue. Permanently. Since then, things have been generally a lot calmer and more pleasant, with happy drunks the norm. 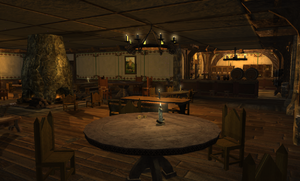 Some 300 years ago, a character calling himself the Terrible Toy Tinker attempted to lay siege to Beerburgh, but was thwarted by several of the local lamplighters who torched his army of wooden toys in the middle of the night. These lamplighters would go on to found the Ashbringers' Garrison. While the Terrible Toy Tinker escaped the event, it is not known what came of him in the years since.

This event, later called the Tinker's Flame, was the most dangerous thing to happen in Beerburgh for about 275 years. When that time went by, another tragedy occurred. This was to be known as the Drought of Sobriety. One day, a brewer visited his brewery, when to his alarm, he found out that he was out of beer. So, he rushed over to his neighbor and was shocked to find that they were in the same ghastly predicament. Together, they ran around town and found out that everyone in the town was out of beer! This horrifying drought was eventually solved when a traveling merchant with several hundred gallons of beer passing through was brutally assaulted and killed in order to take his beer. However, the town was never quite the same.

The Hamlet of Beerburgh is located in a hilly, uneven landscape somewhere to the northeast of Herowin. The town is flanked by both the River Kraktor, a commercial transport thoroughfare that delivers the precious lager to Tradeburg where it is sold, and the River Stinks, the longest river in the world that brings all sorts of refuse south to the Qu'tox Ocean. The western portion of the hamlet is somewhat more elevated than the eastern portion, a geographic feature that promotes stumbling and eventual falling down especially when intoxicated.

Beerburgh is best known for three distinctive varieties of beer: LOLager, ROFLager and FMLager. LOLager is the tamest whilst FMLager has the notoriety of putting even the stoutest warrior under the table. The tourist trade in Beerburgh is very strong with a particular surge of visitors during the beer months, particularly October and November. Most of these tourists often have to cut their stays short, however, as their copious consumption of ale often leaves them penniless within days.

Beerburgh residents are very wary of people who are sober more than an hour a day. Therefore people who are actually in fit state to hold an office never get elected in Beerburgh. Of the 3,000 permanent residents few give a darn about politics and those who think they do are really just lying to themselves under the influence.

Elections only occur in Beerburgh when there are at least two candidates, hence it took forever for the previous mayor to retire - but he did finally escape the role after a man played a drunken prank on a friend. The friend in revenge bet 500 gold bricks that the man couldn't become mayor of Beerburgh and so he entered the race. Both friends laughed it out over five pints of FMLager each. The elections were held the next day while they were completely incapacitated. The election was close; the man won by one vote. Some drunken bum stumbled into the voting office looking for a restroom and the man's ballot box hole was good enough. What he left was deemed good enough to count as a vote, the only one. The inadvertent winner got his 500 bricks along with the worst job in town.

Analysts predict that he will be mayor for life as no two people are expected to run (or stand unsteadily) at the same time within his lifespan. Lucky for him, he often gets intoxicated enough that he will eat anything, which could potentially lead to being lethal. However with heroes always trying to promote their guilds, it is unlikely that he will ever die as easily as merely choking:

!Hero's Diary↻
06:00 The mayor of Beerburgh suddenly started choking during a public ceremony. I leapt from the crowd, yelled out 'Not on 'guild's watch!' and performed the Heimlich maneuver until the mayor coughed up a leprechaun and started to breathe again. They'll remember our guild around here, that's for sure.
Retrieved from "https://wiki.godvillegame.com/index.php?title=Beerburgh&oldid=100866"
Categories: