Difference between revisions of "Beer belly"

This skill is more prevalent in male heroes than females.[1] This skill is dependent on your heroine's drinking frequency when visiting towns. Therefore, this is known as the most preferred skill for which to need training; most heroines are continuously pursuing higher achievement in this skill whether they know it or not.[2]

The beer belly skill allows the heroine to develop a stomach that looks not unlike she is hiding a watermelon under the shirt. The inflated abdomen offers both attack and defense potential. As an offensive combat skill, the beer belly can be used for "belly bucking"[3] This causes blunt-force trauma as well as the possibility of knocking over the enemy. A high level of beer belly skill can also give the user the power to shake the ground as she walks, causing opponents to loose their footing and fall down. 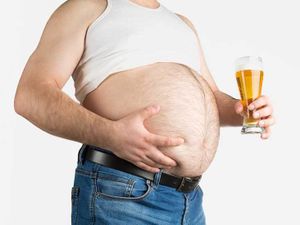 The heroine will have a "pooch" in their belly, a tiny bulge, which is barely even noticeable when they are wearing a bikini. This affords minimal offensive and defensive usefulness, but also doesn't impair the heroine's chances with the shop owner's Template:Son or daughter.

The heroine will be able to "pinch an inch" of fat around their waist, but it does not really hurt the monster in any way. The greater girth can be intimidating to smaller monsters, and will definitely have everyone around the water cooler gossiping about how the skill user has "really let herself go."[4]

The heroine has a round, protruding belly thanks to their alcohol consumption. They can use it to push, shove, hit, slap, or move the monster out of the way and sometimes taking their breath away. Missile attacks to the midriff will bounce off harmlessly. The ground trembles when the heroine stomps her feet. 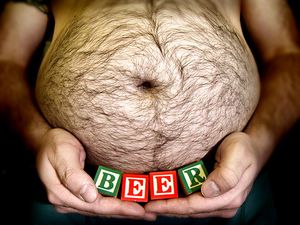