Difference between revisions of "Beer Bay" 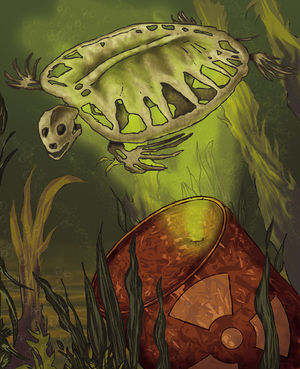 In Beerburgh's early days the town was faced with a problem. A lot of the people living there were unpleasant and became violent when they were drunk. They were ruining it for the people who wanted to be peaceful and drunk. The ordinary citizens began to give up drinking in order to show that they were not involved with the unpleasant thugs. In order to get rid of the thugs the council invented a rumour about a bay near Las Adminos in which instead of water there was beer. There was a mass emigration from Beerburgh as hundreds of the thugs clubbed together to buy a ship and sailed down the Mainstream to the sea. When they arrived at a bay they saw to their delight that the water was indeed the colour of beer. Unfortunately they discovered it was not beer but a poisonous sludge created by pollution. All the thugs were killed a few days after they drank the 'beer'. The name beer bay stuck and the citizens of Beerburgh started drinking again.

the water is the colour of beer but shouldn't be drank. The sand on the beach of the bay is bleached white by the acidic sludge and fish skeletons have been washed up all over it.