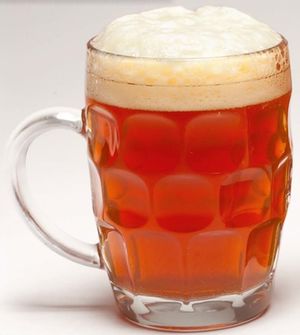 Do you wander the streets in search of a good tavern?

Does your patron often tell you to drink to ease your woes?

Hard drinking heroes, there is now a guild for you! Here at the Beer guild we pride ourselves on the ability to fight hangovers, not monsters. We also make the best beer in the world. Some guilds offer gold, some offer wisdom. We have the beer!

Heroes of all personality types are accepted and encouraged to apply providing they can demonstrate their love of that magic elixir, beer.

Stand up (or sit down) for what you believe in and join the "Beer" guild today!

Alignment: Any providing the interests of the guild are properly represented. Drunken brawls regardless of alignment will not be tolerated in the guild hall.

The Beer guild is an ancient guild whose records date back thousands of years. Grandmasters of Beer guilds in most locations have been respected for their ability to purify water, and make people feel good using a very old and specific branch of magic called "Science". These Guildmasters, also respectfully referred to as "Brewers" have been time honored members of their village, often amassing large amounts of gold. The Brewers have often believed in giving back to the village and have thrown wonderful parties called "Beer Tastings" where various forms of their elixirs can be consumed for a very small price. This has caused their guild hall, nicknamed a "Brewery", to be the social center of any community it is in.

Over the last hundred years various beer guilds have been taken over by the Budmilcor guild, an evil guild planning world domination. Budmilcor has amassed huge sums of gold by mass producing elixir that uses very few ingredients and has little effect on those who consume it. Their elixir is so inexpensive, even the poorest of peasants could affort it.

One by one smaller guilds were assimilated until only a few true Beer guilds remained. These guilds, with the help of local monasatries who provided shelter and protection, kept the ancient traditions alive and worked relentlessly to improve their craft and their beer. These efforts resulted in beers of unmatched excellence and became known as dubbel and tripel because of the increased effect.

Recently, a Brewer began to show people the old lore of Beer and would tell anyone who would listen of the joys of the old days when Beer was good, and made you feel good. He would hire criers, post bills and do everything in his power to bring the Beer guild back to prominence.

And it has been working. The masses have opened their eyes, have seen the evil ways of Budmilcor and have refused to pay for elixir that is weak and tasteless and does relatively little. The Brewery is once again becoming a social center in many communities and Kings have once again proclaimed Brewers as men to be honored and respected. This renewal has caused the number of Beer guilds to swell quickly and have often received protection from Kings making them immune to takeover by Budmilcor.

Recently, a Brewer has come to the Godville area looking to spread the word that good Beer is available again and is looking for enthusiastic members and for townspeople tired of the same old thing to make a Brewery the place to be in the Godville.