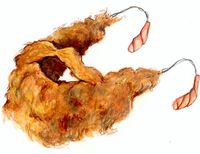 Dwarves have their own mysterious community and their own laws. Beardless dwarfs are dwarves that have broken dwarf laws and been exiled from the dwarf kingdom. There is a special ceremony held by the dwarves three times a year in which the prisons are emptied and the convicts are thrown out and forced to leave. The exiled dwarves have their beards shaved off. Unlike normal hair a dwarf's beard does not grow back as it is part of the dwarves body. The beardless dwarf must remain beardless forever. Understandably most beardless dwarves are very angry about this and some have taken to beating up passing heros to vent their anger at their own humiliation. Beardless dwarves are particularly vicious during battle and can floor enemies much larger than them. This is fortunate for the dwarves as most people are much larger than them). They are rarely photographed as their habit of beating up anyone who photographs them puts most people off.