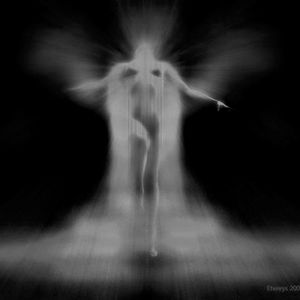 The Aura of Spookiness is an aura that causes monsters, other heroes, and traders to fear the hero. The aura occurs immediately after a hero resurrects and, depending upon how long the hero has been dead, lasts between one and eight hours.

This aura occurs normally when it takes a while for a hero to be resurrected from his god. He has had way too many good times drinking beer and hanging out with Death in the Underworld, so obviously he has learned a few tricks about scaring traders, other heroes, and on rare occasions, scaring himself.

Auras of Spookiness have many effects on the hero. He will be confronted less by monsters, because obviously someone who looks that spooky isn't worth fighting. In towns, traders will be scared into giving discounts to the hero on his wares.

As well, if the hero catches a glimpse of himself in the mirror he might die of fright. This aura, though useful, does have its drawbacks and may cause certain cosmetic issues such as (but not limited to): mouldy skin, visible bones, unsightly blemishes, popped blood vessels, raised and yellow tinted skin, and glowing red eyes .

If a god resurrects a hero while another aura is still in effect, the hero will not receive the aura of spookiness.

!Hero's Diary↻
11:34 After lying dead for very long time, a part of me seems rotten. Oh well, I'm just going to call it the aura of spookiness and go scare some random passers by.

!Hero's Diary↻
07:22 AM Just before I came back to life, a tall bony fellow gave me an aura of spookiness as a parting gift.

!Hero's Diary↻
04:07 An editor from the Godville Times just walked up to me, waved his hands around, and made me glow with an aura of spookiness. When did the newspaper start hiring warlocks?.