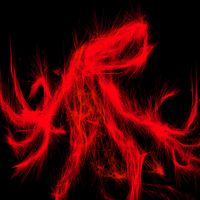 The Aura of Rage is an aura induced by an overdose of magic. When large amounts of magic from an encourage are used on a hero who is already at full health a large amount of the residual magic will simply be unable to affect the hero and will therefore simply surround them, creating the aura.

Having such a residue of magic increases the damage inflicted against monsters.

Additional effects are currently unknown for certain, although heroes have reported some of the following: