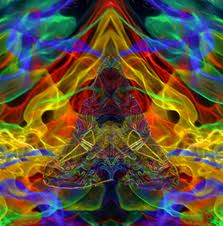 A hero was once walking through a valley, when he stumbled upon the literal end of the rainbow. Angered by the lack of a pot of gold, he kicked the rainbow. However, he was given an aura soon after. When he entered town, strange things happened. Glass cast rainbows indoors. Babies cried when he walked past. Doctors shunned him. Traders cried. After bring chased out by a mob, he sat down and cried. His furious God fired an angry chipmunk down at him, but his aura defended him from it. He then realized his aura wasn't so bad after all. Except for the occasional vomit-inducing migraine, of course.