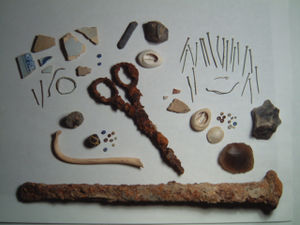 Display of artifacts at the Godville Museum.

Artifacts are items which a hero may find while out questing. Monsters usually carry them around and some even fall from the sky from time to time at the whim of the gods. Most are useless pieces of junk which not even a beggar would find tasteful, but a minority are ancient rarities, or advantageous potions.

A list of artifacts the hero is currently carrying appears in their inventory, which will grow in size as the hero attains higher Levels. The hero will sell them all for gold when they next visit a town. That is their only use heroes know about but their clever gods know otherwise...

Crafting can be used to attempt creating one of the Activatable Artifacts. For example, giving the voice command "Combine “Darwin award” and “Dose of reality”” might create a Deus ex machina. Specifically useful artifacts for this are those that start with the letters B, C, D, G, I, and M, because they can create a Box with a question mark, a Continuum transfunctioner, a Deus ex machina, a Dimensional destabilizer, a Gift of fate, Improbability drive, or a Mystery box.

There are several crafting commands, which are interchangeable, and described on the Voice Of God page in more detail. A simpler method is let the game build the command for you by selecting the first artifact from your inventory, which will then give you a list of other artifacts with which you may combine that artifact. The resulting command is placed in the command line of your Remote Control. Remember to hit the Send button for the command to actually be issued. This is useful in case your hero started doing something else while you were busy looking at the inventory--this works best if they are not in the middle of fighting a monster or in town, like most voice commands.

!Hero's Diary↻
08:26 PM I fiercely combined the bananalyzer and bag with 99 red doubloons into one piece, gave it some filing and got a box with a question mark.

08:26 PM Saw “Compile Bananalyzer and Bag with 99 red doubloons” spelled out in smoke. You really should think of a more environmentally friendly way to get your message across, Exalted One.

08:25 PM The voices in my head are telling me to do things. Is that you, Almighty, or did I forget to take my medicine?

08:24 PM I ate a fortune cookie and the note inside said: “Compile Bananalyzer and Bag with 99 red doubloons.”
Retrieved from "https://wiki.godvillegame.com/index.php?title=Artifacts&oldid=99726"
Category: