Difference between revisions of "Anville"

Anville is one of those rare cases where the town is actually named for the reason you might think of. Anville began as a terrible joke that was circulated among the community of blacksmiths. They gave themselves this name as a joke but this little joke has in fact morphed over time into a large town in which the culture revolves around iron. Not too surprisingly then, the short temper of these blacksmiths combined with their love of decent weaponry means that the history of this town is rife with small battles and petty civil warfare. 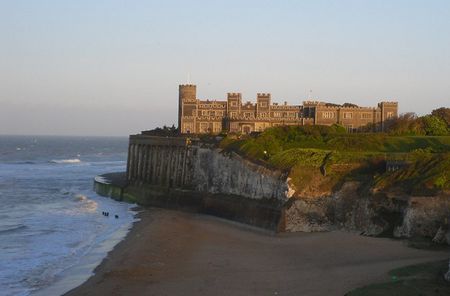 Anville is located directly on the west side of the Hypergiant Delta. Because it is right near a water source, it uses small ships to transport goods using the Mainstream. The town is rich in ores (e.g. gold, silver,iron) and gems (sapphire, emerald, ruby, etc.) which it uses to make and decorate its weapons.

Since the town is located on the coast, it is extremely hard to reach as the westerly winds make travelling around the area a most difficult task. Mines litter the nearby countryside, but the smog they produce is dispersed nearer to the town by the sea gusts while a vast cloud is carried away to another faraway land. The inhabitants of Anville are overjoyed, though one can't imagine that the place receiving the grotesque mists are.

The clanging of hammer to sword has led many an errant hero to the gates of Anville. Forges run night and day in its walls, and the product is finer tack than found anywhere outside them. For those who can garner the funds, an Anvillean makeover will make any hero twice as formidable. Locals celebrate the skill and artistry of their smiths in the Museum of Battle Regalia and Fine Cookware, of which an entire wing is dedicated to chainmail coifs.