Difference between revisions of "Achievements" 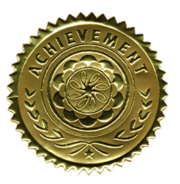 The great achievements of a hero are displayed proudly in two different ways; in the form of a small collection of medals that appear after the God's name around the game, and a larger set of achievements that can be seen on the God's page (to see your own, click the hero's name from the main hero page).

Medals celebrate the achievement of major milestones in the heroine or hero's career. There are only a few of them, and each represents months or years of effort to achieve.

Originally features of the Godville mobile applications, Achievements eventually became mainstream gameplay features[2]. There are many to aim for, and most have variants of different ranks. All currently obtainable achievements are listed below.

To check how close (or far) a hero is to the next achievement, go to the god page (godvillegame.com/gods/god-name) and hover the mouse pointer over the achievement. For example, moving a mouse arrow over the Hunter, 3rd rank achievement will display a window stating "Kill 5 boss monsters. Next: Kill 50 boss-monsters (XX% completed)"