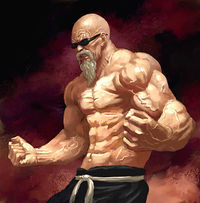 This is me on a regular day... 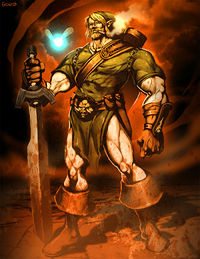 This is my hero.

The Origins of Oh Lawd

As the void of nothingness closed, the universe's mightiest god stepped out. Rippling with muscles, power, and manliness, Oh Lawd appeared. His Beard of Justice shone throughout the universe, causing light to seperate from darkness, and rifts to appear in the time-spance continuum. As he flexed him muscles for the first time, the heat given of by their contractions caused trillions of atoms and molecules to fuse and create the first galaxies and nebulas. Oh Lawd stretched some more and he yawned, the sound waves carried his power through the universe once more. This time, the atoms and molecules reacted differently. They joined in smaller sizes and created small spherical objects. Thus, planets and stars were born. Once Oh Lawd settled down, he looked around. Seeing that he was all alone, he began to think of what to do. He created telepathic internet to keep up with his god friends. On their Twitter, they wrote " creating small life forms! Lol n00bz". Oh Lawd wanted some lulz in his new universe, so he did the same. Oh Lawd made a bunch of people out of clay and mud. He gave them fire, weapons and animals to kill so they could level up and eat.

After a satisfying nap, Oh Lawd saw that they hadn't made much progress, so he gave them a bit more knowledge. After eating a sammich and watching some videos on GodTube, he checked back. Now they knew there was a whole universe around them. However, they believed many gods had created it. Instead of reprogramming them to believe only in him, he made one new human that only believed in him and was alive only to serve him. Once he had finished, he called his friends over to watch. Instead, he found out his friends had already built a game called Godville, where the heroes would live in their God's world, but could sometimes meet and fight with each other in an interdimensional arena or out in the fields.

I was tired, lonely, hungry, and dehydrated. The next town was 52 miles away and I feared I could not make it. As I was resting, a Glowing Grue appeared out of nowhere. We stared intently at each other, knowing this encounter could end in two ways: either I let him go, or we would fight to the death. Tired and weary, I took the initiative and stood up. I had to make this quick. My body was sore, I had run out of Vials of Vitamin C++, and the Almighty was taking a break. I approached the Grue and told him that he better not run. I saw a peculiar look on his face. Not the look I was used to, but rather, a look that was somewhat pleading. But pleading for what? I drew my weapon slowly. He started backing away. I drew nearer. He was sweating profusely, drops falling everywhere. I raised the Vorpal Sword to his neck. He was mumbling something with his eyes closed tighly, an incomprehensible language, but he was speaking it, and rather quickly. I looked at him straight in the eyes, and said, "Goodbye." SCHLICK

With the dead body on the floor, I proceeded to assume the usual routine of inspection. I looted his bag and wallet. The bag contained some food and water along with an unusual assortment of children's toys. I found this strange, but discarded the thought. Once I took a look at the wallet, I knew I had made a huge mistake. This Glowing Grue had once been father. I murdered the father of a family. Somewhere in this land was a mother waiting with her six children (as shown in the photo in his wallet) for this murdered creature to return home with food. No wonder he had a pleading look. He was begging me not to kill him. I felt so ashamed. I begged for forgiveness at his dead body. Knowing that it wouldn't do any good, I covered his neck with my hankerchief. I knew I was now a wanted criminal. Sure, killing a normal, unmarried Grue is OK, but one with a family to feed is an offense. Because of that law, Grues with a family have to wear a patch. Howecer, I didn't see it. Upon further investigation, I noticed he was indeed wearing it, but on his backside on the shirt. Thanks to my laziness, I had killed a father. Nightfall was upon me. There was no escape now.

The air was damp with fear. Shivers tan down my spine after realizing what I had done. I couldn't forgive myself. Would I get caught? Should I turn myself in? Where should I spend the night? I was at a loss. My life would probably be cut short if I was to let myself get caught by the police. I ran. I had no destination, but I ran anyway. Only a minute or so later, I stopped at a roadside bus stop to catch my breath. I knew I couldn't go on like this. I had to find a place to rest and fast. I gazed over the horizon. I noted that a lone taxi was approaching. So I whistled for it and when it came near, the license plate said fresh and there were dice in the mirror! If anything I could say this cab was rare but I thought "nah forget it, yo holmes to bel air!"