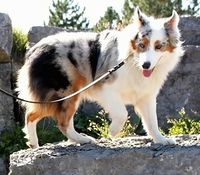 Despite his name, Normius is the major god of domestic wolves, also known as dogs, born somewhat 2 miles above a leading pet store in Dogville. With the godly powers of his, he didn't need to learn much. Besides... Titans (I don't know...) know what those human minded gods knew. Because of this, Normius is considered to have the IQ of a hero. He was perfectly trained and the mortals loved him. And the other dogs. And the cats. Which didn't love him for long. Anyway, here's the list of activities Normius enjoys.