From GodWiki
Jump to navigation Jump to search
Talk
to
me!

Luculuqueraxa (Canis Lunus) is a God of Godville, patron saint and personal savior of the hero known as Toomany Bees.

Well, one way or another, Luculuqueraxa is known to have the ability of flight, though the exact mechanism may remain unknown. Luculuqueraxa is also rumored to be able to breathe fire, but this could be just a smokescreen to disguise the lack of impressive godlike powers. Other than these, Luculuqueraxa possesses the powers of Sleeping and Sort Of Getting Up To Do Stuff Sometimes.

In a rare interview managed to obtain between bouts of spontaneous creation-destruction loops and obsessive wanderings about, Luculuqueraxa can be known to have stated:

--The recording cuts off there.-- 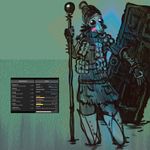 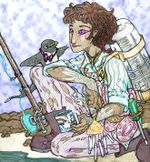 Toomany Bees is a hero of 4 years of age, born January 11, 2017 on a full moon evening under mysterious circumstances. Toomany Bees currently resides with his Ballpoint Penguin Fang (when the two of them are not traipsing about the countryside, not looking for fights, necessarily, but always managing to find them anyway) in Dogville, which as it happens through Spooky Action at a Distance is an inner neighborhood of Godville.

Toomany Bees found Fang, the Ballpoint Penguin, on the full moon one month after the full moon on which he himself was born. Fang was wounded, but Toomany Bees practiced his limited nursing skills on the adorable monster. He recovered rapidly, and in gratitude helped Toomany Bees finish his quest to become an expert in nothing. The Ballpoint Penguin carefully penned some of the wittier phrases as had ever been written in Toomany Bees’ diary. The phrase “I realized I didn’t need to try so hard to become something I already was,” earned the hero a ‘’Certificate of Expertise : Nothing’’ and a shiny golden brick, and the two of them were afterwards the best of friends.

Toomany Bees experienced his first death some time before his first birthday, and celebrates his deathday yearly instead, which happens to fall on Groundhog’s Day, a holiday sacred to Luculuqueraxa for some reason or another. He and Fang traditionally build an open fire and feast on marshmallow roots roasted in aluminum foil, both of which are extremely rare in Godville. Which seems ironic since marshmallow-themed objects and monsters are abundant, as is, you know, literal tons of gold. But anyway Luculuqueraxa is expected to provide the ceremonial marshmallow roots and magic aluminum foil, which Luculuqueraxa more or less does provide, most of the time.

As of some time ago, never mind how long precisely, Toomany Bees completed the Luculuq Golden Ue Ra Xa Shrine of solid gold bricks, which are somehow just lying around everywhere in Godville. (Even in the euphemistically-termed “shoddy” neighborhood of Dogville, the very streets are paved with gold.)

Having little or no money in his purse, and nothing in particular to interest him on shore, Toomany Bees thought he would sail about a little and see the watery part of the world. “It is a way I have,” (he writes in his secret diary full of his most private, innermost thoughts) “…of driving off the spleen and regulating the circulation.” He and Fang are taking their sweet time building a sea ship, however, as Toomany Bees may or may not be afeared of the ocean. Avast!