Golden Cat's objective was to complete a temple in record time. The known record when he started was SBFH's, 70 days. Kure has since mentioned completing his in 66 days. Both these records were shattered by Golden Cat's 20 day run.

He was very shabbily dressed, as most of his gold went into making bricks. 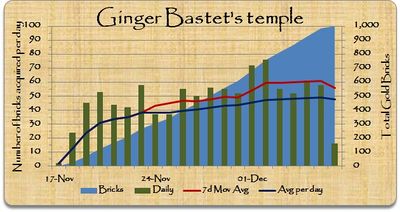 How We Did It

The most-asked question we see is "How?" so here's a brief rundown.

1. Money. You need to be willing to buy whatever charges you need. We set a limit of $500 for a 30-day target, and we came in under budget and ahead of target. We could have done it cheaper or faster. We could also have taken a lot longer or spent a lot more money.

2. Time. You need to watch your hero at all times of the day in order to dig for bosses as often as possible. We averaged nearly 10 bosses per day. We allowed ourselves plenty of time for sleep, but since there were two of us, in the same household, coordination was simplified and we put in long days between us.

3. Game knowledge. You need to have an idea of how long things take to happen, how many actions are needed to melt, and what your hero is likely to do in any given situation. For example, he's in red health, is he likely to run back to town? Do we want him to do that?

4. Stay focused on your goal. If you want to build a temple in the shortest possible time, everything else must support that. You don't throw boss fights just because they get expensive: you're there for the bricks and the gold and the goodies, and you won't get them if you give up. You need to catch your hero in town selling and melt bricks from his gold before he can squander it. You dig for gold when you wake up and you melt before you go to sleep.

Golden Cat entered his first dungeon within minutes of completing his temple.

!Hero's Diary↻
10:23 AM Found myself near the smoldering, brimstone-smelling mouth of a dark cave. Time to go spelunking in hell.

!Hero's Diary↻
10:26 Shivering from dampness, Furora, Thulkred, Golden Cat, Knight Who Says It and Hobbo carefully step down into a dungeon. An old-looking goblin-gatekeeper confides: “Hey, this is a Corridor of Migration! Stronger bosses are not always near the treasure. Don't scatter the trash!” From here one can go to the east and north.

Ginger Bastet worked her first miracle while he was in the dungeon:

!Hero's Diary↻
10:34 A spring of living water broke out of a wall just in time to revitalize already worn out heroes. The miracle was attributed to Ginger Bastet.

The group encountered no bosses and after one minor detour to the south, found the treasure in 47 steps. Ginger Bastet navigated during the latter section.

!Hero's Diary↻
08:37 I looked into the kind eyes of the vanquished monster and suddenly decided — Firefox, you'll be my pet! And I'll call you Dumbo. Bandaged his wounds, gave him a treat and fastened the leash.

Ginger Bastet and Golden Cat do not plan to chase more records. He may hunt occasionally just for fun, but the game is rigged against active players and we see no point in paying Godville for the privilege of beating our heads against a wall trying to build an Ark in record time. Chasing Savings is a joke. Golden Cat would rather find a nice, warm, sunny corner of Ginger Bastet's temple, curl up, and dream of his glory days. Amen.