The Underbed Monster (Sub lecto monstrum) has been scaring youngsters all over Godville and beyond since beds were first invented.

This monster is well-known by children of all ages. It may take on various nightmarish forms, but is generally recognized by its many rows of razor sharp teeth. This is a creature that feeds on fear and harvests children screams for energy so only the most courageous hero can hope to vanquish it. The best tactic to use in dealing with the Underbed Monster is the simplest- one person lifts the bed/bed covers while another stands at the ready with a bat to pummel the beast senseless. One retired hero trademarked this technique, calling it the "Beat the Creep", and he now travels around Godville conducting training seminars. 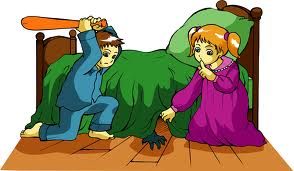 Illustration of children utilizing the "Beat the Creep" method.
Retrieved from "https://wiki.godvillegame.com/index.php?title=Underbed_Monster&oldid=109269"
Categories: