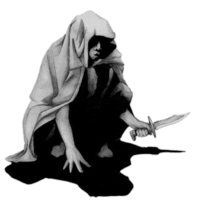 The Assassins are an organization devoted to serving the good people of Godville. The Guild's motto means "Killing is never free". We offer a variety of services to anyone willing to pay. Services include assassination, espionage, intimidation, blackmail and other odd jobs. However, not all requests are entertained: each client goes through rigorous screening to ensure that fulfilling the request does not upset the balance of justice, nor will it be a dishonorable act.

Members of The Assassins enjoy several benefits of being in a guild of professional mercenaries. Traders that fear for their lives have been known to give away items to heroes with a Guild ID. We also have several well qualified doctors on hand to help with any injuries you may incur during your battles. You will also receive discounts on equipment and healing supplies in stores. On a related note, we highly discourage members from abusing the benefits of their Guild IDs, and may (very rarely) take action against violators who excessively exploit this power unfairly.

Some of the present-day Assassins are the descendants of an ancient group of assassins. The Old Assassins were honor bound to carry out the duties of their guild: killing anyone who they were paid to kill, no questions asked. Eventually conflicts arose in the guild and civil war broke out amongst the members. One side defended the old ways: killing for honor and duty, while the other side cared only for money. The War of the Night, as it soon became known, claimed the lives of two thirds of the guild. With no clear victor, the leaders decided that enough blood had been shed, and decided to split into two separate guilds: The Assassins and KAOS (Killing as Organized Sport). The Assassins are the only known surviving guild. However, rumors are circulating that KAOS may have merely restructured into a more underground organization...

The founding hero, Veloth, under the watchful eye of

Boethiah  , has since left the guild to pursue what he only wished to disclose as "personal endeavors".

Not long after guilds across the world were granted authority to elect a guild leader through voting, Deecht, hero of

Audi  , was successfully elected as the guild's first official leader, on the 23rd of January 2015. Unfortunately, he seemed to have mysteriously disappeared on the 6th of March 2015, leaving the position vacant not long after taking on the mantle. A definitely suspicious green cookie was found.

The second leader, Tremole, hero of

Vytaan  , was elected on the 22nd of April 2015. He also formally introduced the guild-exclusive rank of "ninja", the symbolic badge of loyalty granted to long-serving members of the guild.

Kyruf  's heroine, was elected on the 17th of September 2015. He converted the "ninja" rank to "mentor", to further emphasize the respect given to the high-ranking members by the guild, and encourage the virtue of passing down the skills of the assassin, preserving the trade for future generations of guild members. When the election came, he couldn't nominate because he was too busy teaching the youngest generations the old and dirty job of the assassin, to not let this tradition be forgotten...

As time went by the fourth leader was chosen: On the 12th of March , for the first time in the history of "The Assasins" a hero under the watch of a goddess was chosen. One of the most loyal members Rodion Winter , the hero of

Auroth   (known by some as "The Void's Keeper") took on the role of the guild leader. He remains at his post by said day, and established the tradition of appointing a Chief adviser a "Hand of the King". The first H.O.K was none other than Starld of

Nightwalker64   who was sworn in office on a bible of the flying spaghetti monster whilst drunk, to this day he doesn't recall the event.

Heroes of any alignment are invited to join us, though heroes that disguise themselves as pure heroes are often able to get closer to their targets than heroes that are evil.

To join The Assassins, type Join "The Assassins" guild into the Voice of God bar and send it to your hero until your they start the quest. It's usually more effective when your hero is idle.

If you are a member of The Assassins, feel free to add your name to the list of members. This will make sure you have emergency backup contacts in case you need assistance in certain missions.

Members are encouraged to support the guild in all ways (using influences in towns). However, avoid overdoing it as it may compromise our success in stealth missions if our members become too easily recognized by our targets.

You could take the time to look at the previously active forum thread, and pass messages through the guild council. With the advent of guild leadership, the council will be expected to be more active than before. Take note that the vow to confidentiality still applies here, so no sensitive information should be discussed, including contracts or client information.

We do not force members to stick to this guild forever. We respect your decisions in which guild you choose to ally with. In fact, the guild goes through a lot of reshuffling as our older members find it harder to remain incognito in the open, and we require fresh faces to help out. Do note that we have... protocol to ensure that all leaving members are absolutely unable to disclose any classified information about the guild.