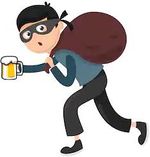 The Beerburglar, like its cousin the Common Hero is a humanoid being. It has a slightly short stature with average heights of 170 cm in the male variety and 150 cm in the female, which gives it some feelings of insecurity.

It has hair on its head, eyebrows, a nose and a mouth. Two ears, two eyes, two feet, two toes and more often than not, really sore knees. It is in other words, indistinguishable from any heroine, at least on the basis of a first glance.

Beerburglars almost always appear heavily laden with flasks, but again that is no clear sign and could easily indicate a hero. It is then, only on behaviour and alimentation that Beerburglars can be identified.