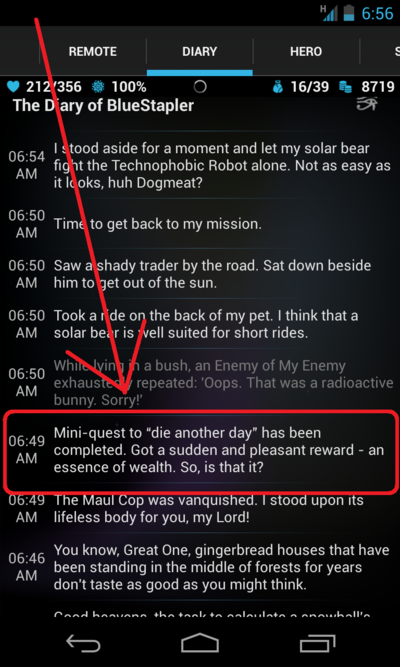 "Tear a byte to get a lot of bits", got three bold items: truth embellisher, a comic timer and an ego alternator - Mabinogion 25 Jun 2017

"Find a shadow in the dark", got an alchemical transmuter - Mabinogion 26 Jun 2017

Right anything that is wrong

2. Wrong anything that is left - more godpower

1. I can't recall what I got for the first quest, but I'm pretty sure it wasn't a golden brick (I don't have any in my inventory).

2. The second quest gave me an activable artifact - a Mole-extracting shovel to be exact.

Agreed on this. I've tried to add generic rewards to entries for new mini-quests rather than exact listings. Boss monsters are also not the same each time. Proviso on this is that some rewards / bosses do seem to be hard-coded to specific mini-quests. -- S624 (talk) 09:13, 14 November 2018 (UTC)

And jut for the record / interest of future observers, the issue S624 raises here has since received extensive discussion over at the Boss-monsters talk page, in the "Above-ground" vs "Mini-quest" bosses thread. -- FeRDNYC (talk) 21:20, 21 November 2018 (UTC)

Thoughts about mini-quest chains and their articles

At the moment, most of mini-quest articles being part of a chain have their own page and have something like this in their text:

While working on the upcoming {{Quest}}, I was wondering if either we should keep that progression format or have chained mini-quest merged into the same article to avoid jumping between links?

Personally, I prefer the miniquests staying as separate articles, just for the fact that there are some miniquest chains where the components have absolutely nothing to do with each other (for instance, the only time I've seen my "put the arch in architecture" miniquest, it followed along behind something about planting), so it is difficult to write a coherent narrative for the sequence.
Also, I haven't noticed if the disorganized chains stay in the same sequence all of the time, the way that the themed chains do. Some of them have defined reward artifacts and special entries for progressing to the next quest in the sequence, but some don't.
Is there a problem with having a parent article that depicts a known chain, and child articles that deal with each of the components of a given chain? --SourceRunner (talk) 21:49, 11 April 2019 (UTC)

No problem for me, but I needed to be sure we keep that way to adapt the infobox parameters (standardization, all that...). And the "parent" article will probably always be the first mini-quest of the chain I guess.

Also, I haven't noticed if the disorganized chains stay in the same sequence all of the time, the way that the themed chains do.
— User:SourceRunner

The themed quests always seem to go in the same order, especially the ones that the devs, themselves, constructed. So the Lycanthrope chain always stays in the same order. But unthemed quest chains? I'm not sure that they maintain an order.
Up above, in 2017 and 2018, this talk page shows evidence of changes made to sequences. And since the one time I saw my "arch" miniquest, I haven't seen it again, despite activating enough artifacts and tracking enough POI miniquests that I should have, if things stayed in the same order. Either some of them change order, or the devs have swapped out miniquests recently.
Re: Parent/Child pages: If you wanted the first quest to be the parent, that's definitely up to you since you're doing the work. But I was thinking of the Parent page being about and summarizing the miniquest chain, and each child page being one of the miniquests. --SourceRunner (talk) 13:10, 12 April 2019 (UTC)

For the Parent/Child pages, I don't see the point of having a parent different from the first quest article, it would be an almost blank page for almost no information IMHO (plus the summarizing of the chain can be easily done on first part of that article or even on the mini-quest main page). As for the chain themselves, I was sure the sequences were fixed but now, I don't know. And considering the amount of mini-quest, it will take ages to check... Is this something we should call help on forum for? --WardPhoenix (talk) 14:43, 12 April 2019 (UTC)

As SourceRunner said, what I've sometimes referred to as the "story" mini-quest chains — the ones with set mini-quest type boss-monsters all their own — those appear to always have a set progression. The only time there are any variations in the "story" is when (permanent) changes are made by the admins.

Which makes sense: Since the "story" depends on the right set of quests coming up in the right order, there's a chance the plot could get lost if it's subject to randomization. Simplest to just leave it static and predictable.

But, say hypothetically we just focus on those fixed, well-defined "story" chains, the ones that end with a guaranteed battle with a specific Mini-quest boss-monster. The kind where:

You do the "Send in the clowns" chain, you fight a Mad Clown at the end. You "Find a level boss and defeat it", you fight a Level Boss just like it says. Do the quest that takes you from heaven to hell, meet an Ancient Demon. Do the vegan-related mini-quest chain, look it's a Vegan Cannibal. Do the werewolf chain, fight a Wherewolf. There's a pattern so clear you can see it from space.
— User:FeRDNYC
— Talk:Boss-monsters#Pundemonium_status

Those, we could (in theory) document as a single unit, the entire progression represented (by existing convention) by the "parent" mini-quest at the start of the story chain. Indeed, there's already at least one existing example of that representation: (Each of the Mini-quest boss-monsters (all six of them) has the list of mini-quests that make up their story "chain" listed in the "Mini-Quest Progression (Artifact Award)" section on the boss monster's article.)

There's one reason I'd be reluctant to make that the "canonical" representation of even those well-defined, "story"-based mini-quest chains, though. If any of the individual mini-quests in a "story" chain will ever appear in other contexts, like as a random mini-quest outside the normal "story" progression, then it should exist on its own, on par with the other mini-quests. Not exclusively as one section of a larger story-progression article. ... ... ...And that's the thing, I don't feel confident saying those "excursion" encounters can't ever happen. -- FeRDNYC (talk) 23:47, 16 April 2019 (UTC)

Basically, the problem is that we are lacking up-to-date data about mini-quest. And unless we get a full detailed list from the devs (which is unlikely), I'd say we need to collect those data before going one way or another. Even though it may take quite a while. --WardPhoenix (talk) 11:33, 17 April 2019 (UTC)

It is actually possible to have the individual mini-quests exist both as separate articles and as part of a larger "chain" article simultaneously, through article transclusions.

It's something we've avoided doing on the GodWiki so far because it can make things a bit complicated and confusing and weird — though some of those issues can be worked around, with a bit of extra hoop-jumping. But maybe we're ready, maybe the mini-quests are the need that outweighs the additional complexity and makes it worth dealing with.

To get a basic idea of how it would work, take a look at the Marvel Database's (Wikia) Glossary:S article, a fairly typical example. (Er, best to use a desktop browser if at all possible. The appearance on mobile is... unpolished.)
Items of note:

Building composite pages means editing becomes very tricky, because it doesn't occur where the user typically expects. It also makes the normal edit tools useless in confusing ways. If someone wanted to edit one of the Glossary:S entries and they just hit "Edit" on that page, here's what they'd see:

That's it, that's the whole thing.

Like I said, at least to less experienced users (but really to all users), that's confusing as hell. And it requires extra care on the part of everyone, to avoid messing it up. Even though I've been working with it for a while now, editing still feels a bit "weird" and fragile whenever I'm working with any part of that manually-assembled Glossary structure, whether it's the aggregate Glossary pages, the templates that drive them, or the individual Glossary:Entry articles. It's annoying, quite frankly.

But, to meet a certain very specific goal — maintaining content so it's divided up into multiple small articles, while being able to view a set of them all together on one page — it's probably the most serviceable approach.

Definitely worth considering... the structure makes a lot of sense, and seems potentially perfect for our needs, once we capture a good amount of the data that (agreed with WardPhoenix) we are currently missing.
Since we are presently considering the structure for a very small subset of GodWiki articles-- the themed "story" miniquest sequences-- it might be wise to take up the instruction method FeRDNYC and Djonni used in creating Januwiki 2019 article templates, and append commented-out instructions to editors who reach for the glossary page to edit. A commented-out note for them to look at the discussion page, where we place a comprehensive explanation of how to actually edit the page, might head off frustration and confusion, as long as we place it at the top of each "edit" section as well as the top of the whole-page edit.
I've been finding that people who are actually serious about editing GodWiki are not averse to a little pausing and reading, so it might work. What do you think? --SourceRunner (talk) 13:03, 17 April 2019 (UTC)