Basically everything that happens within the guild happens with a hearty woo woo woo that renders its enemies totally incapable of doing anything besides screaming "Mayo!" in a strained falsetto that makes everyone around feel vaguely uncomfortable.

Also, Conyeezy and Xeroph have made it the guild's singular goal to find the moped, and bring it back to the crib. Any information leading to the capture of the moped will be rewarded with at least two delicious sandwiches, and a belt buckle.

Anyway, Sweetguild got its start in October of 2011 when the founding members realized they could start a guild in Godville. Obviously, this feature was not to be missed, and the two gods who were the original members took the opportunity to make a witty change to the name of their place of employment and use it as the name of the guild. Hence, Sweetguild was born.

Guild Goals (Or, "How I Learned To Stop Worrying And Love The Woo Woo Woo")

As is mentioned in the overview section, this guild exists to increase the woo woo woo factor of Godville. We feel that the GDW (Gross Domestic Woo) has been overlooked for some time, and that it is incumbent upon us to provide stimulus in the form of woo distribution. Therefore, we do literally everything with a woo woo woo. We smite enemies with woo woo woos. We celebrate their smiting with woo woo woos. Our heroes use woo woo woos to write in their diaries, and the diaries themselves are made from 100% woo stock.

In addition to woo distribution, the guild is trying to locate the moped and return it to the crib. This secondary goal sometimes may seem at odds with the primary one, and occasionally results in some unspoken friction between gods and heroes, but once they have a chance to go into the confessional and see their name written in cursive with an arrow pointing to their face, things seem to smooth over somewhat.

The Legend of the Lost Moped 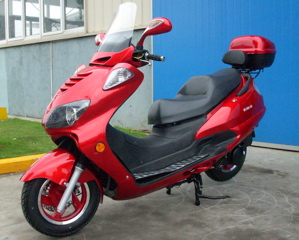 One of the moped's several thousand identical twins.

Xeroph   discovered his magical salesmobile had broken down. Sadly, it could not be fixed. It had been in too many battles and suffered too many insults to continue on. Nonetheless, Xeroph still needed to be able to get from his castle to the daily round table meetings, and back again. It was then that

Grebe   offered up his moped as a means of transportation to Xeroph until Xeroph could buy his own transportation. Xeroph, being the humble and friendly God that he is, was incredibly thankful to Grebe for his wildly generous offer, and promised to care for the moped as if it were his own.

Xeroph drove the moped to the round table meetings every day, relishing the wind in his hair and the feeling that he was aggravating other, less magnanimous Gods by driving at a top speed of 25 miles per hour.

One day, he returned to the castle, leaving the moped in its appointed place outside. He went about his evening's activities without incident, and fell asleep next to his queen with nary a worry in his mind. He had taken great pains to be diplomatic and considerate of every God he'd come in contact with in his travels, and thus he felt assured his peace-loving kingdom would be the last place some angry God would ever strike.

But, the next day he woke up to find the moped missing! He was consumed with an anger and sadness that words cannot describe. He called his God-buddy Grebe to give him the bad news, and would have been inconsolable save for the fact he knew Grebe's insurance company would provide Grebe with the gold to purchase another moped.

What happened next was indescribably insane. The police came to the crib to fill out a report, collect Grebe's insurance information and the serial number of the moped. But, as it turned out, Grebe hadn't written down any of the pertinent information about the moped, leaving the police with no choice but to abandon their search and his insurance company no choice but to hoard the gold they'd originally allotted for Grebe.

From that moment on, Grebe and Xeroph were bound by the treachery of the devious God who'd stolen the moped, and will stop at nothing to ensure its safe and dignified return. The moped was 35 CCs of happiness. It is a noble and valiant steed.

...And it is most likely being used by a God to transport illegal fairy dust around the kingdom.

Bring the moped back to the crib!

To be included in the "Members of Import" section, a God must impress someone with wiki editing priveleges sufficiently enough to persuade them to use those priveleges to make changes to the guild's wiki article. The following is a list of those Gods that have done so up to this point: